Fate: Sold to Taiwan, May 6, 1974. Cannibalized for spare parts. Some weapons systems computer components were installed on a Taiwanese guided missile destroyer the ROCS Yun Yang DDG-927 (formerly the USS Hamner DD718). The Yun Yang was decommissioned  on 16 December 2003 and sunk on 6 September 2005.

Among the awards and decorations awarded to the USS Lyman K. Swenson are:

VIEW THE COMPLETE TEXT OF THE SHIP'S HISTORY AS COMPILED BY MEMBERS OF THE SWENSON ASSOCIATION.

On November 13, 1942, Captain Lyman Knute Swenson, seen at the right, was lost in action when the cruiser under his command, the USS Juneau, was sunk during the battle of Savo Island.

The Swenson was immediately assigned wartime missions in June of 1950 at the outbreak of hostilities in Korea. Under the command of Capt. Robert A. Schelling, the Swenson (code name "Evidence") and five other accompanying ships earned the nickname "Sitting Ducks" during the landing at Inchon. Subjected to heavy counter-battery fire from the enemy, the Swenson suffered her first casualty when LTjg David H. Swenson (no relationship to the ship's namesake) was killed by shrapnel while acting as a spotter on the bridge as the result of a near miss in the area of the bridge. He was buried at sea shortly thereafter. ENS Noonan suffered severe head injuries as a result of the same blast. Although severely injured, ENS Noonan returned to duty aboard the SWENSON some months later, albeit with a steel plate in his head. LTjg Swenson was the only "Sitting Ducks" casualty and ENS Noonan was one of only five sailors aboard those ships that were injured during the Inchon assault. The six ships received a commendation from J. M. Higgins, Commander Cruiser Division FIVE, a Navy Unit Commendation from the Secretary of the Navy and a Korean Presidential Unit Citation for their outstanding service during that mission. (Click here for Inchon assault pictures and charts.) 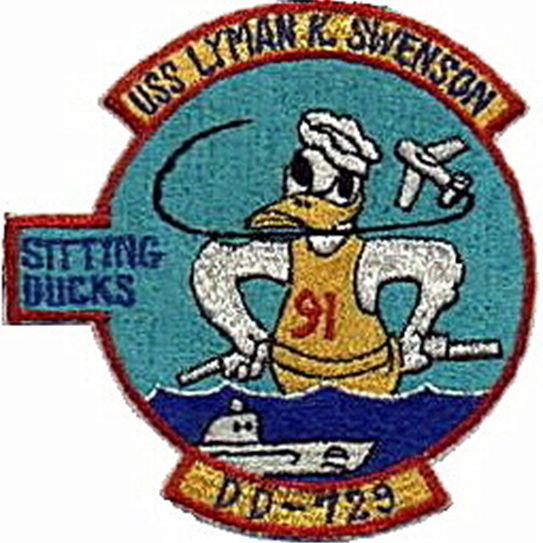 Between 1954 and 1960 the Swenson made annual trips to the Western Pacific. In June of 1960 she entered Mare Island Naval Shipyard as the first Pacific Fleet destroyer to undergo Fleet Rehabilitation and Modernization (FRAM) at Mare Island.

From February 1962 until June 1964 the Swenson was homeported in Yokosuka, Japan as part of Destroyer Squadron Nine.

In July 1964 the Swenson returned to San Diego, California, as part of Destroyer Squadron Five.

In July 1966 the Swenson was reassigned to Destroyer Squadron Seventeen. She deployed to WESTPAC in April 1967 and again in November 1968. She served actively off the shores of Vietnam and Korea during these deployments. 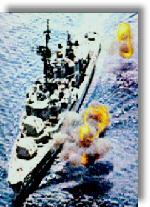 On March 9, 1970 Swenson began her final deployment. While in WESTPAC she fired several naval gunfire support missions off the coast of the Republic of Vietnam, served as Search and Rescue picket escort, and escorted attack aircraft carriers in the Gulf of Tonkin. The Swenson returned to San Diego for the final time on September 5, 1970.

The USS Lyman K. Swenson was decommissioned on February 12, 1971. Twenty seven years to the day after she was launched. 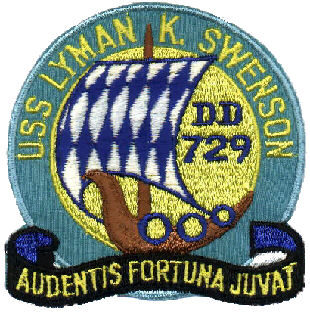 Previously it was indicated in the Ship's History that LTjg David H. Swenson (KIA Korean Conflict) was the nephew of Capt. Lyman K. Swenson.

New information seems to indicate that he was not related to Capt. Swenson.

Glen Ingram, former Secretariat of the DD729 Sailors Association has provided the following:

. When he entered the Academy and his name was placed on the official roster, a yeoman misspelled his name as "Swenson", with an "o". Needless to say, in true military fashion, this was unchangeable. Henceforth Lyman K. Swensen was to be identified as Lyman K. Swenson.

The media coverage of LTjg David Swenson's death at Inchon was misinformation. Captain Robert A. Schelling, C.O. of the Swenson at the time, tried to correct the media version but was unsuccessful in doing so.

Descendants of Capt. Lyman K. Swenson also confirm the original spelling of his last name as being with an "e" and that LTjg David Swenson was not related to him.

(back to Ship's History)